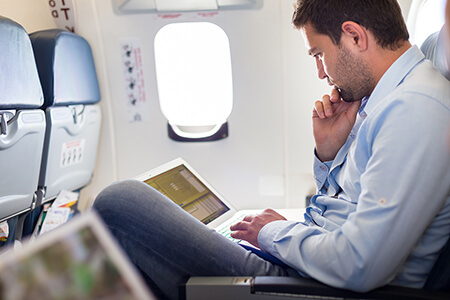 Most business travelers keep their laptops within reach at all times. Which is why this recently announced ban from the Federal Aviation Association (FAA) may throw some frequent fliers into a tailspin. With concerns of battery issues, the FAA, along with other government organizations and airlines, will no longer allow some 15-inch MacBook Pro laptops onboard flights.

In June, Apple announced a recall of their 15-inch MacBook Pro laptops sold between September 2015 and February 2017. The reason for the recall? The lithium battery of affected laptops can overheat, potentially leading to swelling or even igniting.

FAA and other airlines ban

This is not the first time the FAA has banned specific consumer electronics on airlines. You probably remember in 2016, when Samsung’s Galaxy Note 7s had a similar issues. According to FAA’s safety guidelines, electronics with recalled batteries should not be allowed as cargo or in carry-on luggage. These affected laptops should not be anywhere on the aircraft, including below in cargo. This ban also includes flights traveling to or from the United States.

Other countries and specific airlines have issued statements, with varying stances. The European Union Aviation Safety Agency will allow the laptops to be on the flight, but they must be turned off. Singapore Airlines and Thai Airways have banned the laptop from both checked luggage and carry-on bags. Quantas, on the other hand, states all 15-inch MacBookPros, including those without a defective battery,  should be carried in the cabin and turned off during the flight. Virgin Australia also stated that all MacBooks must be placed in carry-on baggage only.

What should you do if you have a 15-inch MacBook Pro?

If your laptop battery has been recalled, their website provides information on their easy battery replacement process. If it is a computer provided by your company, you may also want to notify your IT department.