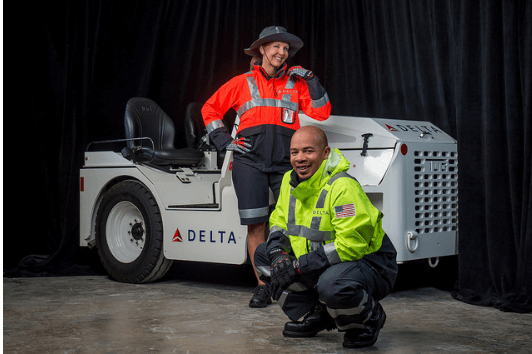 This week, Delta Airlines, along with famed fashion designer, Zac Posen, unveiled their new exclusive employee uniform collection. Premiering through social media on a Facebook Live event, it showed the new fashion-forward look of Delta. The new collection will eventually be worn by 60,000 Delta employees.

You may remember the renowned fashion designer Zac Posen from Project Runway, or his other in-store collaborations, such as with David’s Bridal or Target. He is known for creating high-fashion looks beloved by celebrities and the masses. In preparation of the new line, Posen paired with employees in each department. This ensured the new design was comfortable and suited to their needs.

Ultimately, looks were created for client-facing positions, like flight attendants and customer service agents; and as well as below the wing and mechanical positions, like technical operation employees and ramp agents. 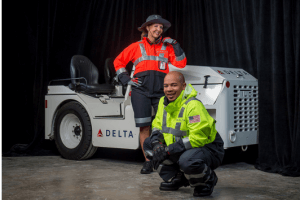 Though the iconic Delta red color is prominent, surprisingly other unlikely colors make their debut in these new uniforms. Dubbed Passport Plum, Cruising Cardinal, and Groundspeed Graphite, these darker hues compliment the red, ushering in a new, contemporary age for Delta. The runway fashion show featured real employees modeling the collection, all from different airport hubs throughout the nation. More pictures can be found in Delta’s ‘look book’ gallery on their website.

After the show, Posen and Delta CEO, Ed Bastian, spoke about their excitement in creating a new global design that permeates throughout the Delta brand. In the same vein that Delta strives to provide individual and exemplary service to their clients, this uniform collection gives the same opportunity to their own employees. Bastain previously said, “The world’s best employees deserve the best uniforms and this new collection is classically influenced, yet modern…Zac and the Delta team worked closely with our people to create timeless and fashionable pieces that reflect the thoughtful and innovative spirit of Delta.”

The next phase will be real-world testing of the clothes.  Beginning in December, 1,000 employees will be testing the uniforms. Based on feedback, the uniforms will be rolled out to Delta employees during the first quarter of 2018. Land’s End has recently been announced to produce the non-client facing wear. The last time uniforms have been updated for client-facing staff was in 2006. Delta last updated their uniforms for below wing employees in 2000. This is just another example of Delta taking opportunity to rise above and further develop themselves as an exemplary airline. Sure, it’s just uniforms, but it symbolizes the changes that Delta is making in all departments. Now with an updated, fashionable ensemble, we can see what really makes Delta different.

Christopherson Business Travel is a corporate travel management company. We specialize in exceptional customer service and forward thinking travel technology, making the lives of our clients and their travelers easier.